National Glass Centre (NGC) was awarded £50,000 by the Gillian Dickinson Trust, to produce a participatory arts project that targeted disadvantaged young people and enabled them to access the arts and culture. 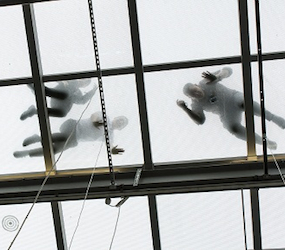 National Glass Centre (NGC) was awarded £50,000 by the Gillian Dickinson Trust, to produce a participatory arts project that targeted disadvantaged young people and enabled them to access the arts and culture.  NGC has carried out a lot of work with schools and families in the past, but has not carried out many projects with young people with disabilities, so the project enabled NGC, and the artists, to develop their practice in working with young people with disabilities and from disadvantaged backgrounds.

The Northern Gallery for Contemporary Art (NGCA), based at the City Library in Sunderland, was a project partner. The young people visited the gallery and saw the current exhibition, and attended a workshop sessions there.  This enabled them to experience another cultural venue of national importance, which they may not have visited before.

A total of 165 young people took part, spanning ages from eight to 22 years old.  125 students from Portland Academy attended one or two sessions each, and from each of the other organisations, between four and eight young people attended the equivalent of 10 full-day sessions. Almost 100 individual sessions were delivered as part of the project.  They worked with professional glass artists at NGC, learned a wide variety of glass making skills and created group and individual art works which will be exhibited at NGC and NGCA.  The group pieces will then be displayed at the schools and youth group premises.

The artists were assisted by early-stage glass artists who are interested in developing a career in community arts.  The artists and the assistant artists all had varying levels of experience of working with young people and with people with disabilities, and so they all greatly developed their skills in this area during the project.

The staff of the participating organisations learned new skills themselves, to take back to their school, college or youth group, so the project was of mutual benefit.
All the organisations wish to maintain the link with NGC through doing more creative activities in the future, and in some cases seeking technical advice such as how best to use a kiln (which some of the schools have already) for making glass.

Some of the young people with Autism overcame their intense dislike of getting their hands dirty and touching sand, through doing sand casting and going to the beach to collect materials for casting.  The group leaders have been very pleased that they have continued to attend throughout the project, and they have commented on how individuals’ confidence, creativity and social skills have increased.  The leaders have been learning alongside the young people, and through being on a more equal footing, it has strengthened the relationship between the leaders and the young people.  Most of the young people had not visited NGC or NGCA before; they are now familiar with both venues and some have already made return visits with their families.  They have seen that it is possible to have a career as a glass artist, and the older ones may consider a creative career in the future.

The project has been very successful in meeting or exceeding its targets.  It has created sustainable partnerships with the participating organisations.  The young people, the organisations and group leaders, the artists and NGC as a whole have all benefitted from what they have learned during the course of the project.